Classical singer Jonathan Ansell and England and Arsenal striker Kelly Smith have won the British Lung Foundation’s male and female ‘Lungs of the Year 2008’ award in recognition of the fantastic use they have made of their lungs over the past year.

The award, a framed photograph of a beautiful glass lung sculpture by award-winning artist Annie Cattrell, is being presented to both Jonathan and Kelly during the charity’s annual Breathe Easy Week (16th – 22nd June). The theme of this year’s campaign is ‘Big Breaths’ which aims to raise awareness of lung health. 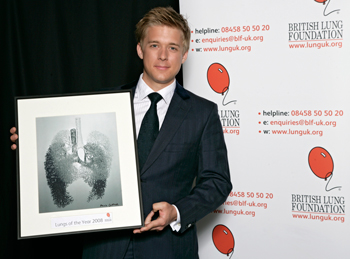 Former G4 member Jonathan Ansell, who is now a hugely successful solo artist, knows only too well the importance of looking after his lungs so that he can take big breaths when he is performing. Jonathan topped the classical charts and hit the top ten of the pop charts earlier this year with his debut solo album.

He says: “Having a tenor voice I have to make sure that I take good care of my lungs so that I can reach all those high notes! I am delighted to have won the British Lung Foundation’s Lungs of the Year award and I fully support their Big Breaths campaign.”

Footballer Kelly Smith says: “As a footballer for both Arsenal and England, I know just how important it is look after my body and have a good diet; it helps me to keep at the top of my game. It’s fantastic to have won the British Lung Foundation’s ‘Lungs of the Year’ award. I am a great supporter of the work that the British Lung Foundation is doing to promote the benefits of having healthy lungs”. 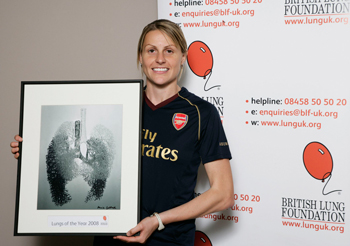 The British Lung Foundation says that by exercising and taking bigger breaths, we deliver more oxygen to our muscles, giving them energy and strength and helping us to feel younger, live longer, run faster and sing louder.

Dame Helena Shovelton, Chief Executive of the British Lung Foundation says: “We awarded Kelly and Jonathan the Lungs of the Year award because they are both fantastic ambassadors for lung health. They both understand how precious their lungs are and why they must take good care of them if they are to be the best at what they do”.

The charity is encouraging everyone to make sure they can take ‘big breaths’ by following its new Airway Code, a ten step guide to healthy lungs. Airway Code tips include taking regular exercise, staying smoke-free, protecting your lungs from dust and fumes, and being asbestos aware.